The growing use of mobile phones and text messaging in developing countries prompted FHI 360 to develop innovative ways to use the technology to improve family planning services. Through its PROGRESS (Program Research for Strengthening Services) project, FHI 360 launched the

program in Tanzania in 2010 as part of a study evaluating the feasibility and acceptability of providing basic information about contraceptive methods through a free, automated, interactive and on-demand text messaging service.

During the September 2010–June 2011 study, the messaging service was accessed by 2,870 unique users in Tanzania. The service drew the attention of many family planning implementing partners, as well as Tanzania’s Ministry of Health and Social Welfare.

In 2012, PROGRESS and Johns Hopkins University’s Tanzania Capacity and Communication Project supported a mass media promotion of the service as part of “Jiamini!,” a national family planning campaign. The goal of this campaign was to expand the m4RH service to a nationwide audience. In the campaign’s first five months, the number of unique m4RH users increased by more than 20 times. In addition, the campaign enables m4Rh to reach more populations, including young people and men.

Plans are under way to expand the service to m4RHplus that will include new features, such as more in-depth information about the benefits, side effects and misconceptions of contraceptive methods; an automated reminder system for refills and appointments; and role-model stories about positive use of family planning methods among specific populations, such as young people and HIV-positive women and men. 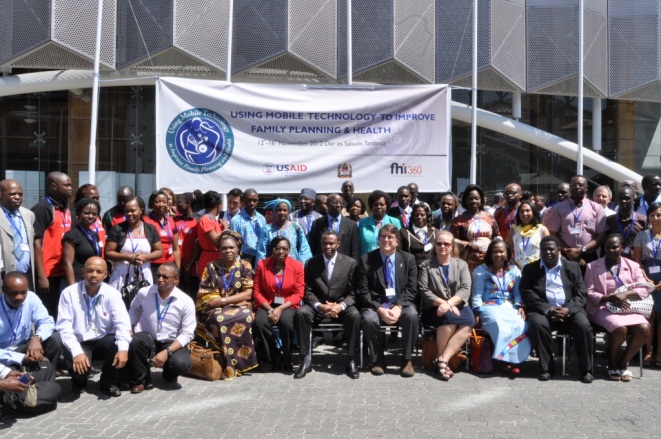 The use of mobile technology to improve family planning services and support reproductive health was the theme of a U.S. Agency for International Development family planning conference, hosted in Tanzania in 2012. The conference brought together representatives from governmental and nongovernmental organizations, the private sector and civil society from 13 countries. It featured panel discussions and a gallery walk of interactive technology demonstrations from each country. Each country prepared an action plan; progress on the plans will be reviewed at the International Family Planning Conference in 2013.

FHI 360’s PROGRESS team in Tanzania provided a range of support for the conference, coordinated the half-day session highlighting Tanzania’s mobile technology innovations and provided one of the keynote speakers.