Ensuring access to maternal health services, even in Zambia’s most remote villages

Complications during childbirth are common in Mulala, a village where Prisca and many other women do not have access to a skilled birth attendant. Mulala — in the Mansa District of northern Zambia — is roughly nine miles (14.5 kilometres) from Kalaba Rural Health Centre, the nearest health facility, and almost 25 miles (40 kilometres) from Mansa General Hospital, the nearest major hospital. The distance and lack of transportation from Mulala often prevent pregnant women from reaching the health center, particularly in instances of sudden onset of labor. 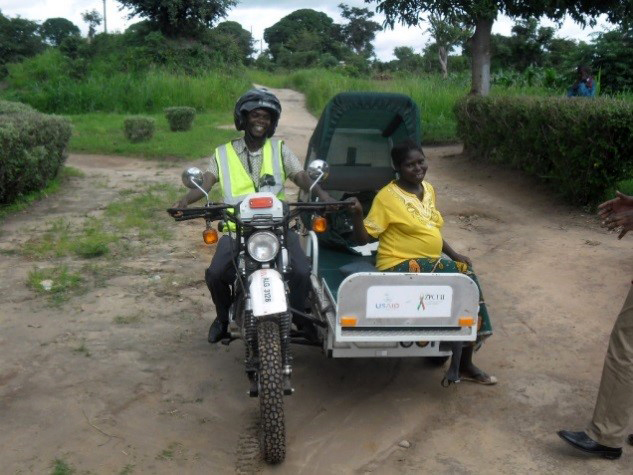 FHI 360’s Zambia Prevention, Care and Treatment Partnership (ZPCT II) project is working in the Mansa District to ensure that pregnant women have access to maternal health services. ZPCT II, funded by the U.S. Agency for International Development (USAID), has provided the Mansa District with 12 motorcycle ambulances and three traditional ambulances to help transport pregnant women to local facilities where a trained birth attendant can assist in their deliveries. These efforts are part of Saving Mothers, Giving Life, a public–private partnership that aims to dramatically reduce maternal mortality by improving access to and quality of maternal health care.

Giving birth in a health facility greatly increases the chance of maternal and child survival. In Zambia, the risk of maternal death is 65 times greater than that of women in the United States, according to the 2013 annual report of Saving Mothers, Giving Life.

Shadrick, a volunteer motorcycle driver trained by ZPCT II, rushed to Mulala village and drove Prisca to the center. There, she was admitted into one of the newly constructed waiting shelters for mothers in labor, built by ZPCT II. The absence of waiting shelters had previously deterred women like Prisca from delivering in local facilities.

For Prisca, as well as other pregnant women, the transportation and services provided by ZPCT II have created a sense of security and reassurance. “Had it not been for this motor bike ambulance, I don’t even know how I could have reached this facility,” she said. “I am so confident that I am in [the] safe hands of well-trained health workers here and if [there is] any complication, I know that here they can call for the ambulance to take me to Mansa General Hospital, where the doctors are.”

USAID and the U.S. President's Emergency Plan for AIDS Relief (PEPFAR) laid the groundwork for successful ZPCT II activities in Zambia by strengthening the prevention of mother-to-child transmission (PMTCT) of HIV services, refurbishing facilities and training staff. The majority of pregnant women in the sites support by ZPCT II were already receiving PMTCT services as part of the Saving Mothers, Giving Life partnership.