A landmark study designed to fill a critical gap in the scientific evidence on contraception for women at risk of HIV is now underway in sub-Saharan Africa.

The Evidence for Contraceptive Options and HIV Outcomes (ECHO) Study, a multicountry, open-label randomized clinical trial designed to explore the relationship between the use of hormonal contraception and the risk of HIV acquisition, has begun enrolling participants at two sites in South Africa. 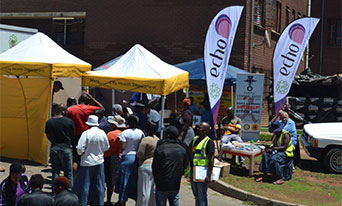 These sites, in Durban and Hillbrow, Johannesburg, are the first of the 12 study sites to start screening and enrolling participants. About 7,800 women will be enrolled at sites in Kenya, South Africa, Swaziland and Zambia, with results expected in 2018.

The ECHO Study will compare the risks and benefits of two hormonal contraceptives — the injectable depot-medroxyprogesterone acetate (DMPA or Depo) and the Jadelle implant — and one nonhormonal method, the copper intrauterine device (IUD). Researchers will examine whether a link exists between the use of any of these reversible, highly effective methods of contraception and greater risk of HIV infection.

Some research results suggest that DMPA use increases a woman’s risk of acquiring HIV infection, but the evidence is limited and inconclusive.

“This issue remains an important, long-unanswered public health question — one that is particularly important in African countries where many women face a high risk of HIV infection and rely on DMPA for contraception,” said Dr. Willard Cates, Jr., distinguished scientist and president emeritus at FHI 360, who serves on the ECHO Study management team. “The ECHO Study will provide evidence to address that uncertainty and help women at risk of HIV make informed decisions about contraception.”

Women interested in joining the study first learn about its procedures and the risks and benefits of participation through an informed consent process. Those who decide to enroll in the study are randomly assigned by computer to receive either DMPA, the Jadelle implant or the copper IUD.

ECHO is led by FHI 360, the Wits Reproductive Health and HIV Institute at the University of Witswatersrand, the University of Washington and the World Health Organization, working in partnership with 11 other research institutions in sub-Saharan Africa. The study is funded by a consortium of donors that includes the Bill & Melinda Gates Foundation, the Swedish International Development Cooperation Agency, the U.K. Medical Research Council, the Government of South Africa and the U.S. Agency for International Development.

Read more about the study at www.echo-consortium.com.