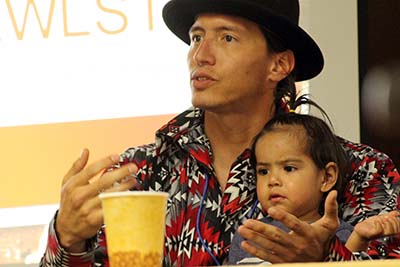 Across the United States, less than 2 percent of the 46,000 Native American and Alaskan native children who are enrolled in Head Start and Early Head Start programs speak their tribal languages at home. To preserve and maintain these languages, it is critical to ground young children in their heritage. But, what are the best ways to incorporate tribal languages and culture into the classroom?

Through the American Indian and Alaska Native (AIAN) Head Start Collaboration Office, funded by the U.S. Department of Health and Human Services Office of Head Start, FHI 360 is working with tribes to answer that question by building networks among tribes and the 154 AIAN Head Start programs across the 26 states in Region XI.

The idea for language summits grew out of the frustration felt by tribes in Washington state, who expressed concern about the lack of collaboration among the tribes to support each other, share resources and build a community. Micker Richardson, FHI 360’s Director of the AIAN Head Start Collaboration Office, worked with the Washington State Department of Early Learning to develop the concept for the first language summit, which was hosted by the Puyallup Indian Tribe in 2017. Since then, two more summits have been held in Washington.

Underpinning the success of the summits is the concept that tribes should take ownership of their community’s language education. Working with the native language education network, FHI 360 shares management tools and creates the space and support structure needed for tribes to communicate with each other through virtual peer networks and to host statewide language summits.

This summer, Montana held its second language summit at Salish Kootenai College, in Pablo, the heart of the Séliš, Ksanka and QÍispé homeland. One keynote speaker was Kevin Shendo, a former tribal leader for New Mexico’s Jemez Pueblo and the tribe’s current education director. He spoke about the value of these summits, saying, “This is not happening just in our community. It’s bigger than us. It’s in every indigenous community. If we want our languages to stay strong and survive, partnerships and involving others is crucial. We’re all one community.”

Francis Auld, a language instructor and an elder member of the Confederated Salish Kootenai Tribes, spoke of the challenges of incorporating tribal languages and culture into the classroom, but said progress is being made. “Tribes – one is here, another there, still another over there – the tribes are at different levels of capacity, but it’s gotten a foothold and that looks hopeful,” he said.

Since this effort began three years ago, FHI 360 surveys have reported at least a 5 percent increase in language inclusion within Head Start/Early Head Start programs. Some techniques to achieve an increase include elders teaching language and mentoring teachers within the classroom and community outreach to bring in more cultural elements, such as drumming, into the curriculum.

As word of the success of the summits in Washington and Montana spreads, demand from other states is growing. “We are now working on summits in Minnesota and Wisconsin, with plans to focus on other states as tribes take over the planning and execution of these events. We work hand in hand with our tribal planning committees to ensure the sustainability of these summits,” says Micker Richardson. “We are honored to work alongside our tribal programs to build these educational networks and infuse our native children with the knowledge of their ancestors, their communities and ultimately of themselves.”