Community members join together to support a young man in Uganda

For Abas, a young man living on the outskirts of Kampala, life has been a series of ups and downs. His formal schooling ended early when his father, his only caregiver, was unable to pay school fees. Abas found casual employment, but he was cheated out of earned wages by his employers. 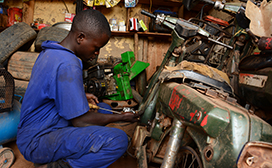 In his teen years, Abas was arrested and detained in a juvenile facility. Surprisingly, this proved to be a positive learning experience. He explained, “The period I spent there was enough to open up my eyes to the real world and changed my life and outlook on things.” He received life skills training, counseling and legal assistance, as well as catch-up classes beyond his fifth-grade education.

These services were provided by the Companionship of Works Association, a local nongovernmental organization participating in the Family Resilience (FARE) project. FARE addresses family-child separation by helping children who are living on the streets or are in the justice system return to and remain with their families. FARE also works to prevent family-child separation in families where the risk of losing children to the streets seems to be high. It is part of FHI 360’s Accelerating Strategies for Practical Innovation and Research in Economic Strengthening (ASPIRES) project, which partners with the AVSI Foundation and is funded by the U.S. Agency for International Development (USAID).

Children who are not cared for by family members are more likely to be neglected, abused and exploited. They are also more vulnerable to health and behavioral problems and can face challenges in developing relationships, a sense of identity and self-esteem. Poverty is a significant driver of family-child separation. The FARE project operates on the theory that a combination of case management, household economic and livelihood strengthening, and social support will stabilize highly vulnerable households, make the return of separated children to family care feasible and prevent future family disintegration.

In October 2016, Abas returned home with a positive outlook. But, he had yet another challenge to face. He said, “My father received me well but later abandoned me as he searched for greener pastures.” His father never returned.

Abas was alone but not completely abandoned. Three community members stepped forward to assist him. An “aunt” (a close neighbor, not a relative) was willing to provide for his basic needs. However, she made a living by selling homemade liquor, and her small home was not a suitable place for a young man to sleep. Another neighbor, whom Abas describes as a “good Samaritan,” offered Abas a bed in his home. And, FARE identified a local motorcycle garage owner who had mentored several kids over the years to provide Abas with an apprenticeship.

As Abas describes, “I was trained on business selection, planning and management, and later placed for apprenticeship, my choice being motorcycle mechanics. With the skills I have so far attained at the garage, I can earn some money once in a while and have hope that, with time, I will be able to earn regularly after completion of the training.”

FARE provided other forms of support to Abas and his caregivers. A case worker follows up with Abas, his caregiver and his mentor to make sure things are going well. The good Samaritan was enrolled in the program’s parenting skills course. The aunt received monthly cash transfers for six months, some of which helped with basic household expenses. The rest of that money went to Abas, who used it for transportation to his apprenticeship and tools he needed for work. Abas also used some of the cash to pay laborers in a brickmaking enterprise he started.

Abas’ story highlights the importance of community and how community can become family. The aunt, the good Samaritan and the business owner were unrelated community members who saw a youth in need and stepped in to help, bolstered by the resources and support of the FARE project.