Victor, a 10-year-old boy from a Moldovan village, knows firsthand what a judge is and what a trial looks like. He was sexually molested and had to testify in court about his experience. For any child, courtrooms can be intimidating and confusing; for children who have experienced or witnessed abuse, this anxiety is made worse by the vulnerability of their position as children testifying against adults who have hurt them. 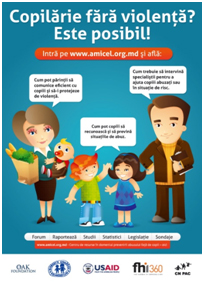 Moldova has a shortage of criminal investigators and prosecutors who know how to work with children to make the process easier or who know how to adjust their approach so they do not re-victimize the child unintentionally, such as by making the child tell the story of their abuse several times at different hearings.

Before the trial, Victor was prepared for what he would experience in the courtroom by a child psychologist from the National Center for Child Abuse Prevention (known as CNPAC in Moldova). When Victor went to court, for both the criminal and civil trials, he was able to speak calmly and clearly about his experience without being frightened by the process or re-exposed to his abuser.

And Victor’s judge received training from CNPAC in how to talk to children who have experienced or witnessed abuse. Under the Moldova Civil Society Strengthening Program (MCSSP), which is implemented by FHI 360 and funded by the U.S. Agency for International Development, CNPAC was able to provide that same training to more than 100 prosecutors and judges.

“During the hearing of the child, I was the only person who was present. I did not even need to interfere because the judge was capable enough to properly interview the child. Victor opened his heart and spoke freely about the trauma he went through in his family,” said Oxana Sevcenco, a psychologist at CNPAC who worked with Victor. “This shocking and dramatic case urged the judge to insist on the necessity of creating a specially designed room for the hearing of child victims. Later on, a fully equipped hearing room for children was established,” she added.

“It is not enough to plead for changes in the legal and regulatory framework. It is necessary to change the attitudes of professionals involved,” said CNPAC’s director, Daniela Sâmboteanu. “Both aspects are complementary; therefore we develop them concurrently.”

“These courses are very useful and necessary because they help us to develop new practices. I’ve acquired a lot of new information and learned techniques and psychological tools that I didn’t know of before that are important. Many of my questions have been answered,” said Nadejda Agatii from the prosecutor’s office in Chisinau. “Although I applied a special approach in such cases so far, after the training I learned that I need to be more involved.”