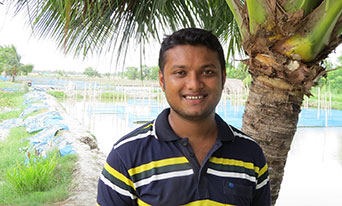 Sheikh Sagor, a commercial farmer who owns a fish hatchery in Bangladesh, first learned about mobile money in 2013 through television advertisements and billboards. He was curious but unsure of what benefits the service could offer him.

The following year, Sagor was able to attend a mobile money workshop organized by WorldFish, the implementer of the Aquaculture for Income and Nutrition project in Bangladesh sponsored by the U.S. Agency for International Development (USAID). The workshop was funded through a grant provided to WorldFish from FHI 360’s Mobile Solutions Technical Assistance and Research project, also funded by USAID. In this workshop, Sagor learned how to use mobile money to buy cellular airtime, pay and receive salaries and make domestic transfers.

Sagor has always been interested in new technologies, and the training provided him with basic information to explore mobile money in depth. He then did his own research. Sagor spoke with existing users and local agents and experts to determine how mobile money would best fit within his hatchery’s payment streams.

As a result, he had his staff open mobile money accounts and disbursed their salaries directly into their mobile wallets. This method proved more efficient — and provided more security and transparency — than dealing with cash. Sagor later used mobile money in business-to-business transactions. He made digital payments to suppliers and used mobile money to purchase supplies, such as nets, polythene bags and feed for fish, as well as the cricket helmet he uses while fishing — a common practice in Bangladesh.

Now Sagor receives mobile payments from clients, such as those who purchase his juvenile fish. He is working on a client database and plans to reach out to customers to encourage them to open and use mobile money accounts, which will enable them to place and pay for orders over the phone, resulting in faster delivery.

Sagor has become such a champion of mobile money that he has helped members of his community open mobile money accounts and provided informal training on how to use them. He also sends and receives money for others, just to give them a real sense of the benefits the service provides.

Sagor believes, however, there is room for improvement. He thinks that the service costs for mobile money transactions are very high. The cash-out charge is based on a percentage of the transaction, which can be especially costly when cashing out large amounts of money. Sagor would also like to see mobile financial service products specific to agriculture value chains. Ultimately, he would like to see a robust mobile money ecosystem for agriculture.

Read this blog to learn more about FHI 360’s work to ease the transiton to mobile money in Bangladesh.
Another blog explores the potential benefits of mobile financial services in Asia.