Pailin, Cambodia is a mountainous region with a population approaching 70,000.1 The region also has the highest risk for malaria in the country. This World Malaria Day, April 25, 2012, members of the Pailin provincial health department will join with more than one hundred village malaria workers to walk the provincial capital, also called Pailin, holding banners with key messages about malaria prevention and treatment. 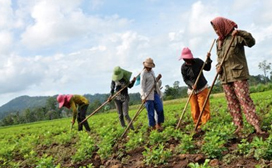 A highlight of the campaign was a Caution Mosquito concert held on February 7, 2012, organized by FHI 360 in collaboration with the Cambodia Health Education Media Service. The concert attracted nearly 20,000 visitors — far exceeding organizers' expectations. During the event, approximately 255 bed nets were re-impregnated with insecticide and 114 visitors received blood tests for malaria. Three tests were positive, and the persons were treated.

FHI 360 has also produced an educational video comedy about malaria specifically for migrant workers. The short video promotes early diagnosis and treatment, and describes good prevention measures, such as how to avoid mosquito bites and the importance of using insecticide-impregnated bed nets. The video will be freely distributed to the target population in the coming months.

The partnership among FHI 360, the government of Cambodia and village malaria workers is paying off. In the last three years, the province has had no reported deaths from malaria.

1. Population in year 2012 as reported by the Cambodia Ministry of Planning.