The diverse panelists at FHI 360’s recent discussion, “Can Breaking Development Silos Make a Difference for Women and Girls?” drew a common conclusion: A more integrated approach to the design and funding of development programs has the potential to better address the interrelated challenges faced by women and girls around the world. However, they also stressed that integration across sectors and disciplines is a more difficult process and that additional evidence is needed to understand how best to create, deliver and evaluate holistic development solutions that meet the needs of women and girls. ​ 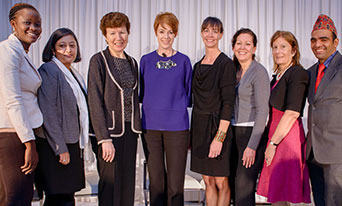 Panelist Rose Wilcher, Director of Research Utilization at FHI 360, emphasized that an integrated approach in the post-2015 development goals era “needs to be driven by evidence of what works and not by our intuition.” She added that the majority of integrated programs for women have not been rigorously evaluated, leaving room for better measurement practices. “We really want to know if integrated development has a transformative effect on women’s and girls’ lives.”

FHI 360 convened its discussion in New York City last month during the 59th session of the United Nations Commission on the Status of Women. The discussion, held in partnership with Johnson & Johnson and Women Thrive Worldwide, focused on the potential role of integrated development in empowering women and girls and advancing gender equality.

It was the second event in FHI 360’s “Does 1+1=3? The Integration Hypothesis” series, which is advancing the global conversation on using collaborative, integrated solutions to address increasingly complex development issues. The series is part of a new US$4 million multiyear investment , funded by the FHI Foundation, to build a global body of evidence on when, how and where to link the design and delivery of programs, as well as to determine the degree to which integrated approaches are cost-effective and sustainable.

FHI 360 believes that if practitioners and funders are deliberately holistic in their approach to human development challenges, their efforts have the potential to produce a more lasting, amplified impact on people’s lives. As a first step to gaining proof on integrated development, FHI 360 conducted a literature review in 2014 to better understand the available evidence on the integration of global health with other sectors of development.

“The challenges people face are intimately linked, and we should be responding in an equally connected manner. But often, the way the development community operates is the antithesis of that,” said Greg Beck, Director of Integrated Development at FHI 360. “An integrated approach, with its ability to meet multiple community needs — including the many stressors of poverty — could be a more effective model for addressing human development challenges. We hope to demonstrate, through evidence, the benefits of integrated solutions.”

Although integrated development is not a new concept, McGill said that development practice continues to take place in “siloed” or segregated ways. Such disconnected approaches do not consider women’s lives, which she described as multidimensional and marked by inequality: “[A]t the community level, it makes much more sense to take a holistic approach to try to address these multiple forms of discrimination and disempowerment.” McGill emphasized that this often takes more time, collaboration and incentives. “It isn’t something you can just slap together.”

Starrs stressed the importance of putting women’s perspectives at the center of integrated development projects but echoed Wilcher’s call for more research on the outcomes of holistic approaches. “Lack of evidence of impact is not the same as evidence of the lack of impact,” she said. “[T]he fact that we don’t have really solid evidence that integration is cost-effective from the systems perspective and also [from] a range of aspects that includes services, doesn’t mean that it isn’t efficient. . . . It just means we don’t know yet. And that we need to do more research.”

Join us: FHI 360, in partnership with Girls’ Globe, will continue the conversation about #IntegratedDev for women and girls during a Google+ hangout at 10 a.m. (EST) April 23, 2015.