Building robots in the mountains of Kosovo

The Kosovo Basic Education Program (BEP) held its second annual robotics summer camp, “RobotiKS 2013” July 7–11, 2013. The camp helps students in grades 7–9 develop their skills in robotic technology. Participants had the opportunity to build robots from LEGO® parts and program them to undertake a number of challenges. For example, students were asked to build a bridge to practice the basics of design and construction. They were given specifications for their bridge designs, which had to meet criteria for length, stability and aesthetics. Local experts, trained by FHI 360, worked with the students. The IPKO Foundation, a local nongovernmental organization, provided two trainers and funded the participation of six students who won a design challenge competition organized by the program in June. 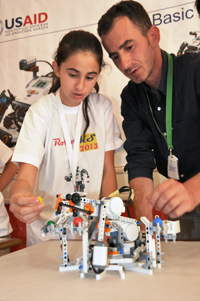 “This was my first time in this camp,” said Fortesa Bejtullahu, a 7th grade student from the town of Gjakova and one of 36 students from 16 schools participating in the camp. “I am glad that we had the chance to show our skills in the field of technology. What I enjoyed the most was the competition, where we were asked to work in groups and build a bridge on our own. I was even happier when my group won. It was a wonderful experience, and I can’t wait for the next challenge and competition to come.”

On the last day of the camp, students received attendance certificates and presented their robots, demonstrating the skills they learned throughout the week. In addition to robotics activities, students participated in sports; watched movies with robot themes; visited the Vita Milk factory, where the production line is automated; and visited a robotics laboratory at the University of Business and Technology.

BEP is a five-year partnership funded by the U.S. Agency for International Development and the Government of Kosovo. The program is implemented by FHI 360 in partnership with the country’s Ministry of Education, Science and Technology and the Kosova Education Center. Kosovo BEP is designed to benefit all public primary and lower secondary schools in Kosovo (serving grades 1–9). The program’s motto is: Developing students’ 21st century skills within schools and communities.