The lack or poor quality of malaria data has presented challenges to malaria control efforts in Nigeria. It has been difficult to ascertain even basic information on the actual number of fevers and confirmed malaria cases seen in health facilities. 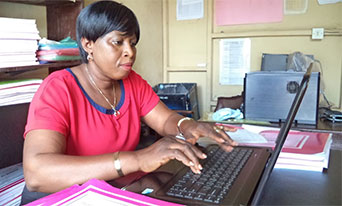 Until recently, she described the completion of her tasks as “very slow, laborious and time consuming.” Despite her best efforts, her reports were usually incomplete and late.

To improve the systems for the routine management of health data, FHI 360’s Malaria Action Program for States (MAPS) project, funded by the U.S. Agency for International Development through the President’s Malaria Initiative (PMI), has focused on strengthening the data system at the LGA levels while implementing effective strategies for the prevention, diagnosis and treatment of malaria in Nigeria.

With MAPS project support, Adebowale was trained on the national HMIS data collection and reporting tools and DHIS2. She was shown how to check for inconsistencies in national HMIS reports.

She now conducts routine monthly LGA data validation meetings in which health facility data are reported and validated. Her job is more interesting, and she feels proud to describe an increase in the completeness of reporting, from 68 percent in 2013 to 100 percent in 2015, from all of the 49 health facilities in her LGA. At the click of a button, health data on her LGA — including numbers on malaria — are readily available.

“I will forever be grateful to the MAPS project for building my capacity on the new data collection tool and DHIS2, both of which make my work a lot easier,” said Adebowale.