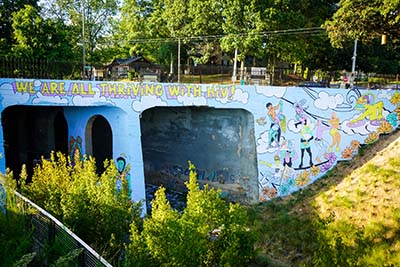 HIV-related stigma is a serious factor in preventing people from seeking lifesaving testing, treatment and prevention services. But, dialogue can help reduce the effects of stigma. To support HIV prevention and education efforts in Atlanta, Georgia, and for our work with the U.S. Centers for Disease Control and Prevention (CDC), FHI 360 created a partnership with Living Walls, a local nonprofit organization, to develop a public art and events campaign that spurs honest conversation about HIV and its impact on the city.

As part of providing communication support to CDC’s Start Talking. Stop HIV campaign, FHI 360 developed a partnership with Living Walls to bring together local artists, scholars, activists and LGBTQ+ organizations to organize community events addressing this pressing public health issue. Georgia has the highest rate of new HIV diagnoses in the United States, and the Atlanta metropolitan area has one of the highest overall HIV rates in the country.

“A year ago, I lost one of my best friends to HIV-related cancer. I wanted to take on this project, to get people talking about HIV, because talking about it is the first step to start breaking down the stigma. Creating spaces for conversation about HIV not only educates people, makes people feel welcome and safe, but could also save lives," said Monica Campana, Co-Founder and Executive Director of Living Walls, The City Speaks.

More than 300 people participated in four main events between June and August 2019:

A team of five Atlanta-based artists gathered inspiration for a large, colorful outdoor mural. Dedicated to “our friends living and thriving with HIV,” it was painted on an overpass in Gordon White Park along the Westside Trail, which is part of the Atlanta beltline in historic southwest Atlanta. A crowd of more than 100 people celebrated its unveiling on August 31.

“Working with Living Walls Atlanta has created a nontraditional network that has come together to bring attention to HIV in a very innovative way with art, dance, performances and panel discussions in a city that has been hit hard by HIV,” said Manuel Rodriguez, Associate Director, Social Marketing and Communications in FHI 360’s Atlanta office.

This collaborative effort has been nominated for the POZ Magazine Awards 2019*, which spotlight the best representation of HIV and AIDS in media and culture.

The Start Talking. Stop HIV. campaign encourages open communication among sex partners, particularly gay and bisexual men and their friends, about HIV prevention strategies. It is one of the five Let’s Stop HIV Together (formerly Act Against AIDS) media campaigns that are managed by FHI 360 on behalf of CDC. FHI 360 provides communications and creative services support through materials development, video production, digital storytelling, social media, media buys and coordination of community events and partnerships in the U.S. cities most impacted by HIV.

*Since the publication of this article, the Living Walls project has won the Best in Performing and Visual Arts category in the POZ Magazine Awards 2019. The award was announced December 9, 2019.