Participation in everyday activities is critical for children’s development and learning, yet disabilities prevent more than 1 million U.S. children from full engagement. The Let’s Participate! project, funded by the U.S. Department of Education’s Office of Special Education Programs, helped infants, toddlers and preschoolers with disabilities to participate more actively through the use of assistive technology (AT) — items that increase functional capabilities, such as tools for bringing toys closer, grips to better hold pencils, or communication devices, such as tablets. 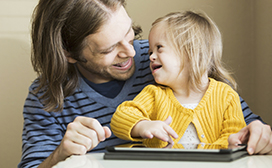 Let’s Participate! was a five-year model demonstration project that assisted early intervention and preschool programs in evaluating and implementing models that promote the effective use of AT. FHI 360 partnered with the Massachusetts Department of Public Health and the Department of Elementary and Secondary Education to establish three model demonstration sites in the greater Boston area.

The project addressed barriers, such as a lack of access to readily available AT resources and devices and the belief shared by service providers and teachers that they were unprepared to use AT. It also emphasized the importance of documenting AT use with children.

An evaluation of the project, which was conducted from 2013 to 2017, revealed many positive results:

Early-intervention service providers and preschool teachers noted how the project had helped with their work. One teacher commented, “Having an AT library to go to enhances my classroom teaching.”

FHI 360’s project partners plan to sustain and expand this work. As a first step, they asked FHI 360 to present preliminary project findings to a council of Massachusetts public and private child agencies. The final project report, to be completed in the next few months, will further help the partners advocate to continue the work. In addition, FHI 360 hopes to replicate the project at other sites.