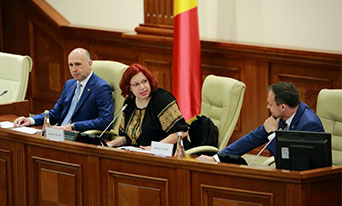 Close to 150 members of the executive and legislative branches of the Moldovan government, representatives of civil society organizations and donors attended the two-day conference in Chisinau, the capital. Attendees included U.S. Agency for International Development (USAID) Senior Advisor on Governance, Rule of Law and Anti-Corruption, Suren Avanesyan. Moldovan Prime Minister Pavel Filip spoke about the important role of civil society in the country’s democratic development. He noted, “Pressure from the civil society mobilizes the government, makes it work more and closer to people’s expectations … [and] help[s] us reach the best formula of cooperation, so both the government and the civil society achieve their goal: a better government at any level, in the people’s interest.”

This year’s conference, co-funded by FHI 360’s Moldova Partnerships for Sustainable Civil Society project (MPSCS), was organized by Moldova’s Parliament and the National CSOs Council of Moldova, a coalition of organizations working to foster a favorable regulatory environment for the sustainable development of the civil society sector. Seven MPSCS grantee organizations attended, and MPSCS Chief of Party Anatolie Beleac spoke at the conference.

The event culminated in Moldovan authorities renewing their commitment to:

This year’s conference comes on the heels of government meetings in March with the EU’s Association Council to discuss the status of the Association Agreement signed in 2014. The agreement mandates that the Government of Moldova consolidate its cooperation with the civil society sector, and it lays out specific steps the government must take before it can integrate with the EU.

Supporting the Moldovan government’s efforts to increase collaboration with civil society is central to the mission of the MPSCS project. Over the course of the next year, the project will continue to work with its partners to further strengthen Moldovan civil society and hold the government accountable to its citizens.