Kabul Polytechnic University in Afghanistan recently celebrated a major milestone — the graduation of the first group of students seeking associate degrees in the history of the country’s higher education system. Twenty-eight students, including eight women, graduated with an associate degree in information technology (IT) and are now equipped with the skills and experience they need to contribute to Afghanistan’s growing IT sector. 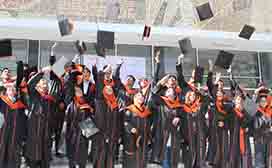 Decades of civil war in Afghanistan have stripped the country of human and technological capacity, stunting its economic growth and development. But, over the past few years, the country has experienced considerable improvements, despite ongoing challenges of violence, poor infrastructure and lack of quality education. The information and communications technology (ICT) sector has played a large role in this progress by accelerating access to information for ordinary citizens and connecting them to financial markets, public services and other vital resources. As of 2002, Afghanistan had only 25,000 mobile phone users; today, it has more than 19 million. Internet usage is also on the rise, and although it remains low, it increased from 0.1 percent to 8.3 percent from 2003 to 2015. Strong growth in internet usage is expected to continue in the coming years, as improving infrastructure and declining prices make it more accessible than ever.

Afghanistan’s ICT sector anticipates the spread of other technological innovations, such as mobile voice, short message services and interactive voice response. Kabul Polytechnic’s associate degree program in IT is preparing young people to be at the forefront of this transformation.

Established in 2014, with the technical assistance of the University of Massachusetts and in partnership with the Central Georgia Technical College, the IT associate degree program was developed as part of the University Support and Workforce Development Program (USWDP), which is led by FHI 360 and funded by the U.S. Agency for International Development. Developed with the leadership of Afghanistan’s Ministry of Higher Education and Kabul Polytechnic University, this five-semester program blends courses on computer applications, networking, software development and English language with real-world experience through a required internship. These internships provide students with a meaningful transition from their academic environment to the world of work. Just as importantly, the internships are achieving their goal of leading to student success after graduation: The program reports that more than 70 percent of the graduates obtained jobs through internships.

Heela Ahmadzai, one of the graduates, is a testament to the quality and relevance of the degree. Following graduation, Heela landed a position as an IT assistant at a local, private company. This job is putting her on the path to achieving a bigger goal: establishing a woman-led IT firm and becoming a household name in the industry. Heela believes that the degree program has prepared her with the business know-how, technical skills and workplace ethics she needs. According to her, “I think I am ready now to take the next big step and change my life. What I have learned is going to be the bedrock of what I do next and the business that I will start.” Other graduates share Heela’s confidence and credit the degree program with preparing them for the workforce.

Building on the success of the IT associate degree program, USWDP is working with 11 public universities across Afghanistan to develop similar programs that offer market-based skills and knowledge. Over the past three years, USWDP has established or supported 32 degree programs, including five newly established associate degrees, 18 bachelor’s degrees and eight master’s degrees. These programs provide students with some of the most sought-after degrees in Afghanistan, such as master’s and bachelor’s degrees in business administration. To ensure that these degrees translate into employment, USWDP will continue supporting the career centers at the universities that in turn provide students with internships, job readiness skills and assistance with transitioning to employment.