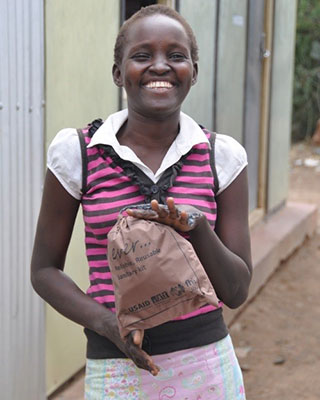 According to Kenya’s Ministry of Education, thousands of Kenyan school girls in grades four through eight miss one and a half school months of class each year due to their menstrual cycles. School absence lowers girls’ academic performance and self-esteem and widens gender disparities in educational achievements. And, many girls who cannot afford sanitary napkins endanger their health by resorting to unhygienic solutions, such as leaves, old cloth, sponges, soil or feathers.

APHIAplus Nuru ya Bonde, which is funded by the U.S. Agency for International Development, partnered with Bedi Textile in 2014 to develop the washable, reusable pads. The kits — which contain two pairs of underwear, three reusable sanitary napkins and two convenient carrier bags — are designed to last up to two years.

The innovation supplements the government’s Sanitary Towels Program, launched in 2012 to provide pads to school girls to ensure that they do not miss classes during menstruation.

“This initiative was prompted by an urgent need to respond to the situation of girls in Kenya’s rural and low-income urban areas who cannot afford disposable sanitary pads,” said Ruth Odhiambo, APHIAplus Nuru ya Bonde Project Director. “We hope other partners will join us to scale up production so that even more needy girls can benefit from this hygienic, cost-effective solution,” she continued.

APHIAplus Nuru ya Bonde involved girls in the design process and used their feedback to refine the product. “When we pretested the kit in two primary schools in Nakuru, pupils and teachers liked it,” said Simon Makori, APHIAplus Nuru ya Bonde Associate Director. “The pupils chose the name Ever Sanitary Pads to signify that it will always be available.”

The reusable sanitary kits are being distributed to orphans and vulnerable girls from poor families that the project supports in the Baringo, Kajiado, Laikipia, Nakuru, Nandi and Narok counties.